Like humans, cats rely on the sun for the majority of their Vitamin D reserves. Unlike humans, however, cats don’t produce Vitamin D via direct sun-to-skin exposure as their fur is far too dense and protective 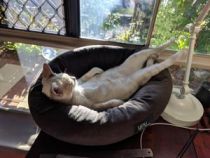 for direct sunlight to penetrate. Instead, cats get their Vitamin D in a rather clever fashion without so much as ruffling their fur. The oil secreted by a cat’s skin works its way to the tips of the cat’s hair and is spread around by the cat grooming itself.

The oil coating the outer layer of the fur reacts with the UV light produced by the sun and breaks down into, you guessed it, Vitamin D. Then, during the next grooming session the cat eats the broken down oils to get a supply of Vitamin D and spreads a whole new batch of oil from lower in its coat to start the process all over again.