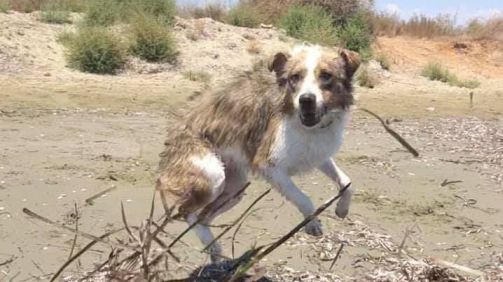 Dog Beaches in Cyprus are in adequate.

In Cyprus, the number of beaches where dogs are allowed is minimal, and some of them are inappropriate and with inadequate facilities, if any. Additionally, assigned dog beaches pose potential dangers, because they can be used by the general public – which means that other visitors to the beach engage in activities that are potentially harmful to dogs.

Such an incident occurred on Friday, 19 July 2019. A dog owner took his young pup, Summer, to the dog beach in Larnaca. Little did he know that, on that assigned beach, someone was fishing and had left fish bait on hooks in a plate. Summer ate some and the hook ended up in her stomach. This was life-threatening and caused a great deal of suffering to the dog. She eventually had to undergo serious surgeries that amounted to almost four figures, not to mention the anxiety this has caused to her owners. Ten days later, she is still recovering, and her owners are left with huge bills, through no fault of their own.

Responsible dog owners in Cyprus are discriminated against. They are banned from most public spaces and have very limited options. The least the Republic of Cyprus can do is assign more dog-friendly spaces, providing fencing, litter-boxes and fresh water supply. Above all, the state must ensure that these areas are safe and exclusive, by prohibiting use to people who engage in unrelated activities, that are potentially harmful to dogs.
For the petition click here.